Deep foundations are used to transfer structural loads through poor soils into underlying competent soil or bedrock. There are many deep foundation elements available, with some of the more popular being driven piles, drilled shafts, continuous flight auger piles (also commonly known as augered cast-in-place, or “ACIP” piles), micropiles, and helical piles. During design, the geotechnical engineer estimates capacity and depth from the results of the subsurface exploration performed at the site; however, these are only estimates and the actual capacity must be confirmed by an appropriate testing program. The following briefly describes two of the most common testing methods available to accomplish this confirmation. Both of these methods are routinely performed by AET.

The oldest method to determine capacity is to perform a “static load test.” This is also the most reliable method because an actual load is applied to the foundation element, and measurements are made to determine movement and load transfer. Unfortunately, this method can also be time consuming and expensive. First, a test pile is installed, and then a load frame is constructed around and over the pile. The load frame typically consists of at least four additional “reaction” piles and a reaction beam, but could also be a heavily weighted platform with a mass larger than the anticipated maximum load. The load is applied in steps to the pile by a hydraulic jack, which pushes against the reaction beam. The loading can be applied to “prove” the design capacity by loading to the design load plus a factor of safety, or a large enough load can be applied to geotechnically fail the pile (pile head movement exceeds a minimum threshold value) and determine the actual ultimate capacity. Measurements can be as basic as recording the pile head movement, or can be more sophisticated to determine the actual load transfer along the pile shaft and at the pile toe through the use of strain gauges, telltales, and other devices. AET has performed static load tests on many deep foundation types, including driven piles, helical piles, ACIP piles, stone columns, expanded-base piles, and micropiles. 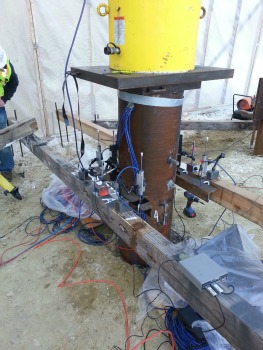 Static load test being performed on a steel pipe pile 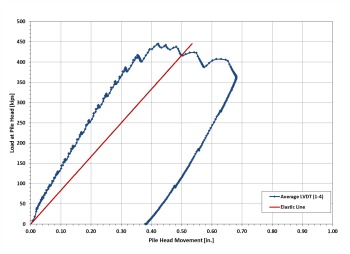 Example results from a static load test on a pile which was loaded to geotechnical failure.

A faster and less costly method to test deep foundations is to perform high-strain dynamic testing, typically with a Pile Driving Analyzer®, also known as a “PDA.” This type of testing is commonly performed on driven piles, but can also be applied to drilled shafts and ACIP piles. With this testing, a special test pile is not required; rather, the testing is performed on actual production piles. Many driven piles can be tested in a single day, both during initial driving and again during restrike to evaluate potential time-dependent capacity changes, commonly referred to as “set-up.” Strain gauges and accelerometers are attached to the pile. The stress wave generated by the pile driving hammer, or by a large drop hammer in the case of drilled shafts and ACIP piles, is measured and evaluated to predict the capacity. AET engineers have been performing dynamic testing for over 25 years and hold advanced-level certification by PDCA/GRL for high strain dynamic pile testing. 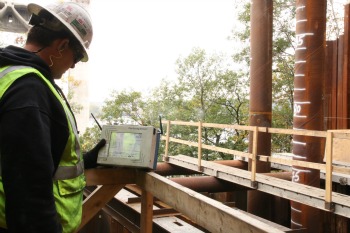