Consider the Cure – Part Two: The importance of concrete curing

Curing is the final step in the nearly 70-step, highly complex process of concrete production and placement. As in any process, missing or poorly performing any step can negatively impact the outcome (i.e., finished concrete) in terms of appearance and sustainability.

In part one of this article, we discussed the critical role proper concrete curing practices play in the longevity and performance of exterior concrete. Now, as the Upper Midwest looks ahead once again to cooler temperatures, we’re focusing part two of our series on the importance of concrete curing—the challenges associated with new variables presented by the advent of winter, proper placement and finishing procedures, and considerations for late-fall curing. Ironically, many industry practitioners think curing is only necessary for the attainment of design strength; however, it’s critical to both the short- and long-term performance of exterior concrete.

What is concrete curing?

According to Dr. Peter C. Taylor, associate director of the National Center for Concrete Pavement Technology and author of “Curing Concrete,” curing is generally defined as “actions taken to maintain moisture and temperature conditions in a freshly placed cementitious mixture to allow hydraulic cement hydration and pozzolanic reactions to occur so that the potential properties of the mixture may develop.” Most of the critical performance properties for early-age exterior concrete are actually related to the paste development within the upper 30 mm (1.2 inches) of the concrete member.

The real costs of proper curing can be relatively low when compared to the performance benefits it provides, namely the preservation of the mix’s design durability and longevity. Simply stated, you can pay now for proper curing, or you can pay in the near future for concrete replacement.

The importance of water and temperature

Water plays an essential role in the production and placement of cast-in-place concrete. Water is needed to hydrate the cement (water of necessity) and to assist in the placement process (water of convenience). At AET, we also understand the “Rule of 20” with respect to the speed of chemical reactions associated with the hydration of cement. For every 20°F increase in temperature, these reactions will occur twice as fast; for every 20°F drop in temperature, they occur half as fast. If a concrete placement occurs in colder temperatures and is not protected and/or heated, the delayed progress of hydration will significantly impact the timing of finishing, curing methods, heat-loss protection and length of time the curing should be conducted.

A normal time delay needs to occur between placement and finishing phases to allow the water of convenience to rise to the top of the concrete and evaporate away (termed bleed water). Colder temperatures delay this process significantly; an unsuspecting finisher could either seal off or work the bleed water back into the concrete surface, negatively impacting its strength and durability.

Cast-in-place concrete has pores, and although bleeding occurs, the pores typically retain water, which is available for continued hydration. Nevertheless, if temperatures prevent complete hydration from occurring, the saturated pores may cause freezing deterioration of the concrete’s upper surface. 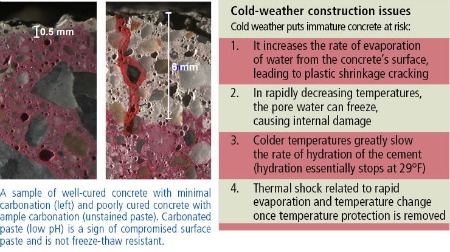 Horizontal surfaces, especially exterior slabs, often present the most challenge given the large surface-to volume-ratio and the usual demand for these features to be serviceable as quickly as possible. Furthermore, these members are often placed at the tail end of a project, which generally occurs in the fall when weather conditions—low relative humidity, cooler temperatures and blustery winds—are less than ideal.

Generally speaking, water curing for seven days is the most effective curing method, especially if the project schedule and weather permit. The benefits of a water cure include the maximization of the hydration reaction; the availability of water is essential to the hydration process—and a properly performed hydration process is key to reducing the potential for plastic shrinkage cracking. (In part one, we addressed the use of materials such as polyethylene, burlap and” burlene” covers to maintain the availability of water at the concrete’s surface.)

If the shape of the member (e.g., as in a vertical structure), weather conditions, time of the year, aesthetics, and final use of the placement do not allow for water curing, a chemical compound may be used.

Chemical curing compounds fall into one of two categories of liquid membrane-forming chemicals under ASTM Specifications C 309 or C 1315. The distinction between the materials complying with C 309 is that these chemicals primarily provide curing properties during the early hardening stages of concrete, whereas materials consistent with C1315 also incorporate longer-term sealing characteristics, as well as alkali resistance, resistance to degradation from ultraviolet light, and non-interference with adhesion properties.

Note: Section below (Cold-weather construction issues) to be sidebar – perhaps we do something with “1, 2, 3, 4” or make it an easy-to-follow chart? 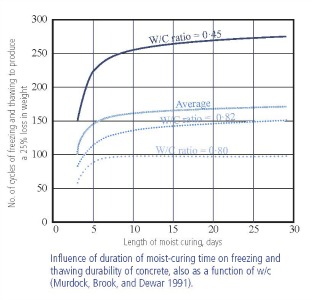 To the left is a figure from Murdock, Brock and Dewar (1991) that shows the relationship between days of water curing and freeze-thaw resistance of early-age concrete. In part one of this article, we noted that exterior concrete, as specified by ACI, should have a maximum w/c ratio (water to cementitious content) of 0.45. Using that curve, testing for freeze-thaw resistance dramatically illustrates the value of improved performance of the concrete after just seven days of water curing.

The reason for improved durability is illustrated in other studies that show reductions of 50% in surface (the upper 10 mm or 0.4 inches) absorption of concrete by simply extending the water cure from one to four days. Testing for abrasion and deicing chemical resistance shows the same benefits for improved surface performance are possible by adopting a longer-term water cure. The availability of the water within the proper temperature range drives the hydration process to fill in the capillaries and pores in the upper portion of the placement.

ACI and other experts indicate that newly placed concrete requires 21 days to air-dry after water curing. If the advent of colder weather doesn’t allow for this critical step, decisions must be made regarding the use of a chemical compound.

Furthermore, to avoid the use of deicers during the first winter season experienced by the exterior concrete, it is highly recommended to simply broadcast sand for better traction.

As always, the use of proper curing techniques is highly dependent upon construction planning and its ability to accommodate special performance needs of exterior concrete design. Too often, planning is ignored for reasons of costs, schedule and weather constraints. However, giving full consideration to proper curing techniques is key to a successful project—one that will withstand the test of time for years to come.

For the next and final part of our series, Part Three we explore methods for achieving the best results possible from late-season placement of exterior concrete, found here

Part One of this series focuses on the critical role proper concrete curing practices play in the longevity and performance of exterior concrete and can be found here.

Dan Vruno, a Principal Engineer in our concrete materials laboratory, can be reached at dvruno@teamAET.com